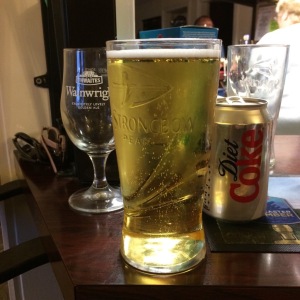 It has been a strange old night, now as most people who follow this blog will know that Friday night is spent in the company of relatively young people who attend the bar at the local Band Club who are waiting for various offspring to come out of Brass Band practice whilst sampling the delights of the local breweries.

Now that is a novel approach to getting revenue across a bar if ever there was one. The great thing about this pastime is that when the kids come out of practice they are far more judgemental that any methodist minister on the planet. But thats not the strange thing, that is Friday nights in Diggle.

It is a cross generational thing and I love that, old crumblies get to talk to bright young things and have great debates, and do you know what, the crumblies more often that not have to concede to the knowledge of the younger generation who know all about the new world order.

But thats not the strangest thing that has happened, whilst deep in conversation I got a tweet from a Dave Robinson, a guy who was in Hollywood last week at a film premier for a film that we worked on last January, who used the Band Club Bar as a location for a scene in the film.

The bar in the film is called “The Happy Beaver” (I didn’t write it, I only directed it) and the Club fitted perfectly with the 80s sitcom feel that they needed for the film, without adding any props other than a 1980s trim-phone.

He sent me a message that made me smile.

The message was “I hope Mr Hollywood director is relaxing with a beverage at the movie set after a busy week”?

What made me smile is that this guy is still Jet Lagged and since coming back has had the week from hell and he still made the time to send a message on a Friday night when he should have his feet up and relaxing.

These people are a rare breed, they take time to thank people who have helped them attain a personal ambition and in the current climate these people are indeed special.

By far my favourite one of these people is Richard Branson. He has a theory which I love and try to emulate. “Treat your staff like your best customers and in turn they will treat your customers in the same manner”.

This theory works, the next time I get a call from this guy for help I will try my hardest to try to make sure I can. It’s not Rocket science, treat people with respect and thank them for there efforts and you will be repaid several times over.

Cristiano Ronaldo the footballer lives his life in a similar fashion. He was taught by his father that any kindness you give out comes back a million fold. Recently I found out that this guy gives one weeks salary every month to charity. Considering last year he earned £50m, that is some donation and I can only assume that his father’s theory is working.

So next time you are feeling a little hard done by, just remember there are people who are far worse off than you who need help in some way.

It’s not only money that solves problems, (but it helps). Sometimes it’s an non judgmental ear or a friendly shoulder to lean on that does the trick, but the secret thing that makes all the difference is time. Invest some time without any expectation of reward and great things happen, these random acts of thoughtfulness make the world a better place and you never know where it can lead to. As Cristiano’s father says,  any kindness you give out comes back a million fold and thats not a bad thing.

Let me set the scene. After what seems like months of being housebound and almost at the point of becoming stir crazy, tonight I have been lucky enough to go to a place that not only serve alcoholic beverages but they also have an almost unique sales proposition.

They are mad enough to put on very good live music acts. Maybe its only once a month but its keeping something alive which is on the brink of becoming extinct.

To add to my spring like insanity we decided to invite our grandkids along to see what they thought of it. I was surprised on several levels because one, they agreed to come and two they actually looked like they enjoyed it. Apart from one complaint that they couldn’t hear what each other were talking about.

So here is my question to all of you thirty / forty somethings out in suburbia when did your kids last go to a live band playing live music. Now I am not counting Karaoke, I mean real people playing real instruments and singing without the aid of auto tuning. I suspect not many.

Now I am not trying to sound righteous or superior and I admit at your age I was that busy paying the mortgage that I didn’t have the time or money to partake in such activities. But to watching young people’s faces whilst listening to a band who are playing songs they have only heard on the radio is magical. Its an expression which is a mixture of recognition and the fact that it doesn’t quite sound the same but in the words of my 10 year old granddaughter, “its very loud but brilliant”.

Whilst in-between sets I now realise I am now beginning to sound like my Dad, I was remonstrating with another grumpy northern bloke that when we were young you could go out any night of the week and listen to a live band and it was nothing special.

How little did we know that in the space of thirty years it would no longer be the norm but a treat to be savoured whenever the opportunity arose.

So here is my request to everyone. Just think what activities you enjoyed when you were young. Try to give your children or grandchildren the chance to have the experiences you enjoyed as a kid. Mine include running down a beach trying to fly a kite, the magic of listening to a band who for that moment in time gave you a feeling like nothing you have ever felt before, the magic feeling that sends shivers down your spine.

Putting it simply give them a chance to live in the moment, experience what we have taken for granted and unfortunately let disappear from our lives, because one thing I have learned is that once it has gone, it has gone forever.